Maybe a good place to start addressing the  problem of handguns in America is to stop glamorizing them. Ya think?… and stop  pointing them at me when I’m on the subway! 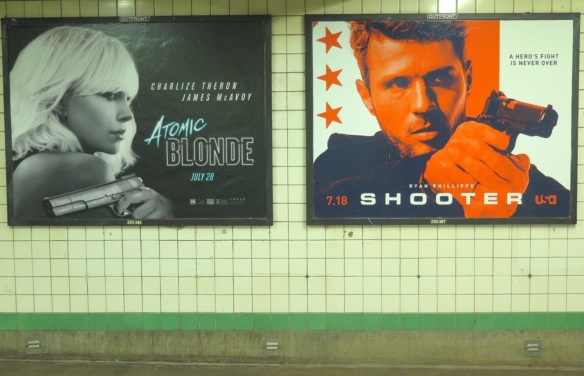 I see something, so I’m saying something. Here’s what I’m saying: Get that fucking gun propaganda out of my face, out of my subway, and out of the minds of Americans!

Who’s designing these tired, trite two-sheets anyway? They are a just a joke at this point. Yeah, Tom Cruise holding a gun on a red background…that’ll really bring ’em in. Idiots. Is it just the result of a phone call from some exec who says, “Gimme one with the gun and one without in case there’s a school nearby?”

And while I have your ear, bring back tap dancing for fuck’s sake! Nobody ever got inspired to go on a killing spree with a tap shoe, did they?

See there? – you thought I was just another flaky Gay Against Guns. Well, Mr. Wood, Mr. Holly Wood…I AM!