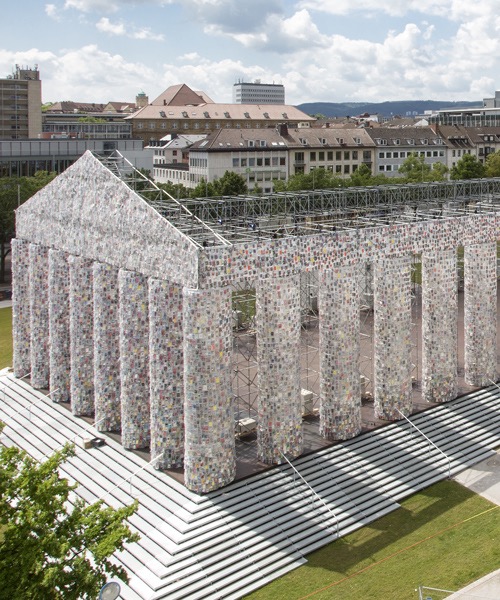 in the german city of kassel, an argentine artist is making a monumental statement about censorship, the banning of books and the persecution of their authors. marta minujín has created a full-scale architectural replica of athens’ magnificent parthenon using 100,000 banned books from all over the world, collected from public donation. in homage to the history of the site, the colossal structure stands on friedrichsplatz — a park where thousands of books were burned during the 1933 ‘aktion wider den undeutschen geist’ (campaign against the un-german spirit). nearly 10 years later, the adjacent fridericianum museum (a library at the time) was heavily damaged during bombing raids, engulfing some 350,000 books in flames. 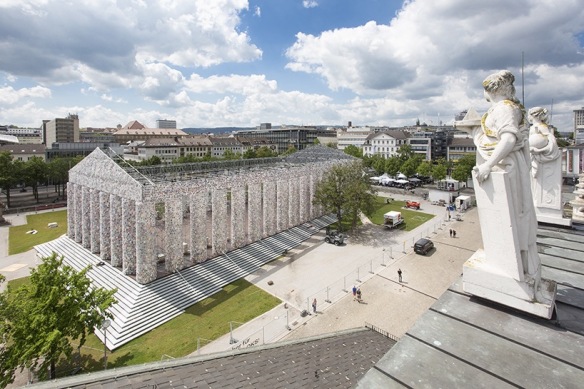 the installation intends to make a statement about censorship, particularly the banning of books.

minujín’s ‘parthenon of books’ is presented as part of documenta 14 — an art festival and exhibition taking place in kassel, germany, and athens, greece this year. the 10,000 collected texts used to give shape to the installation have been secured in protective wrapping and mounted to a monumental colonnade and open roof structure, mirroring the architecture of the anicent greek temple. in collaboration with students from the university of kassel, a list of more than 70,000 forbidden books was compiled and shared with the public as a call to action for donation, making the audience a part of the artistic experience. minujín contradicts the parthenon’s symbolism of democracy to demonstrate the censorship of writing, opposition of expression, and oppression of cultural knowledge that has existed throughout history.

the structure is made from 100,000 banned books from all over the world. the colossal structure stands on friedrichsplatz — a park where thousands of books were burned in 1933.